How Venezuelan journalists are fighting government’s crackdown on press freedom

Informing citizens has become a challenge for Venezuelan journalists in the pandemic. Last year, the local human-rights NGO Espacio Público reported 390 press freedom violations with a peak in cases in March coinciding with the nationwide lockdown.

As such, last year has been one of the most difficult years for press freedom in Venezuela since Espacio Público started registering cases in 2002. 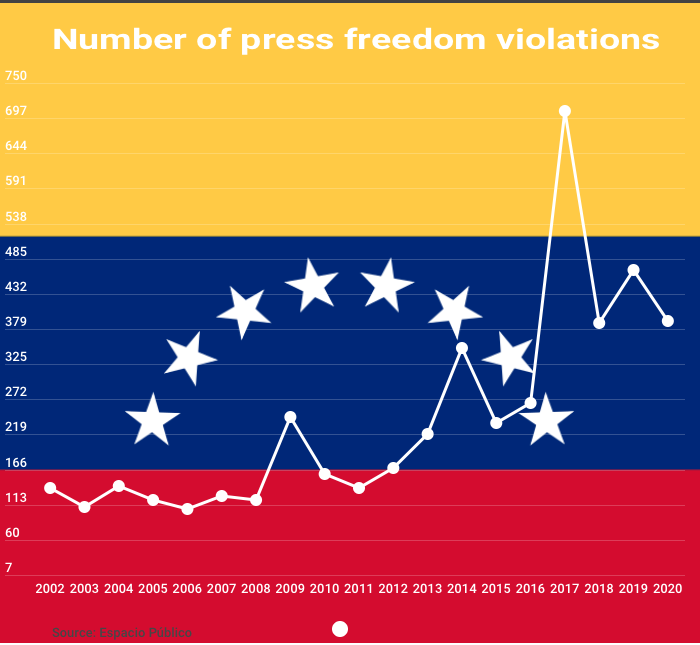 Last year, he fled Venezuela and moved to Miami, Florida, to escape military and government threats. Since his passports and journalistic accreditations were removed from him a year ago, he has not been allowed to travel back to Venezuela.

Stefano Pozzebon, a former Venezuelan-based correspondent for CNN International who is now based in Bogota, says the government’s machinery is slow to discourage foreign correspondents.

“Maduro doesn't allow the New York Times correspondent to come into the country. It’s true but there are still a number of foreign bureaus such as CNN, Reuters, AFP, Bloomberg. There are still a lot of foreign correspondents in Venezuela. It’s just that everything takes so much time and effort. And you never know who you need to speak to. At one point, I was able to speak with the ministry of information. At the time, I was mainly working for Al-Jazeera and RAI (Italian broadcaster). They didn’t think RAI was particularly sensitive so until 2019, my accreditation request was through RAI rather than CNN. CNN is considered the enemy of the people.”

Antonieta La Rocca was presenting her daily TV show ‘Buenos Días’ for the Venezuelan news channel VPI TV on 8 January when Venezuelan authorities seized their equipment and closed down her office.

“Little did I know this would be the last time I was presenting my programme. So, Conatel (National Commission of Telecommunications) arrived. They are in charge of all the telecommunications in Venezuela. And with them was the SENIAT (National Integrated Service for the Administration of Customs Duties and Taxes) which is a fiscal organisation. We, journalists, were told that the news channel would be closed temporarily on the grounds that the paperwork was not in order. Despite that, they took away broadcast equipment, laptops, cameras, broadband lines.”

The SENIAT ruled that VPI TV reporters were not allowed to work within the country.

Antonieta La Rocca has rebounded and keeps working as a reporter for VPI TV in Venezuela. Whatever happens, she says she will stay in Venezuela to inform the Venezuelan people.

Although the speed of broadband Internet has been increasing over the last few years, Venezuela’s Internet connection is still one of the lowest. According to the NGO Instituto Prensa y Sociedad (IPYS), the average speed in fixed broadband (FBB) in Venezuela was 1.671 megabits per second (Mbps) in 2018 as opposed to 46.12 Mbps in the world.

Dibiana, Elis and Paula have been the first team of El Bus TV to go back to work. The pandemic has considerably altered El Bus TV’s concept. The pre-pandemic normal was to jump on buses to give the news.

Instead of hopping on buses, El Bus TV reporters are now reading out the news from the streets and balconies, and writing the news on murals.

El Bus TV was founded in 2017 when forced newspaper closures and censorship were in full swing. Over 200 news outlets were closed between 2004 and 2019. As more and more news outlets were forced to close down, a group of Venezuelan journalists formed Bus TV to bypass censorship and Internet blackouts. All the journalists are spread across the country to report local news.

César Batiz, the director of El Pitazo (“whistleblowing” in English) website, has been fighting against the government’s repeated blocks.

Under restrictions by the state-run telephone and internet service provider (CANTV), El Pitazo website has been blocked three times, prompting Batiz to change the web address from El Pitazo.com to El Pitazo.info to El Pitazo.ml. The latest web address of el Pitazo.net was also blocked.

As a result, El Pitazo has had to turn to a free news application. El Pitazo also gives free news workshops to citizens who then spread the news to their communities. César Batiz says the accumulation of the work is exhausting. The pandemic hasn’t made it any easier.

César Batiz and his team are now exploring alternatives to disseminate news. He doesn’t wish to share them for security reasons.