No-one doubts that the government’s intent towards small business is positive. A slew of interventions put in place in the past month are a testament to that. But concerns remain that this crisis will be the death-knell for many of them. And the risk is not just perceived, it is real.

A long-term growth trend across all business sizes in the UK has been brought to an abrupt halt. This is as a direct result of the pandemic crisis. 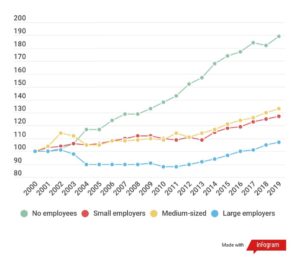 The Enterprise Research Centre (ERC) has published a report that indicates that for the month of March, there was a 70% increase in the number of firms (21206) going out of business in the UK. This is relative to the same period last year. There was also a 23% decline (14 270) in the number of new firms being registered. Many of these numbers relate to businesses operating out of London.

The ERC is the UK’s leading independent research institute on growth, productivity and innovation in SME’s.

Figure 2: UK sub-regions where there have been significant business reductions 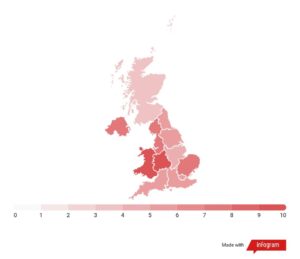 Mark Hart, Deputy Director of the ERC said: “These figures suggest our economy is facing a pincer movement of sharply higher business closures and a concurrent lack of new businesses starting, due to an understandable fear about what the future holds.

“The Chancellor has unveiled a substantive package of support for UK firms, but we know that many are struggling to access this assistance. If those shortcomings aren’t remedied fast, we’d expect to continue seeing a long, slow decline among the private-sector firms that support millions of jobs across the economy.’’

Small businesses are at the heart of the UK economy

And most of these firms are small and medium sized enterprises. There are over five million businesses that fall into this category, generating significant value to the UK economy. They are also the group employing the most number of people. 16 million out of an estimated private sector workforce of 28 million people, according to statistics from the Office for National Statistics.

Thus, 60% of private sector workers in the UK work for SME’s. Within that group, the vast majority work in single-person entities or within a company that employs less that 50 people. This group generates significant value to the UK economy. 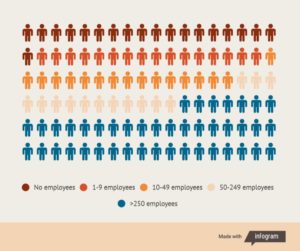 Rishi Sunak has made a number of interventions to support this key part of the economy. The most critical is the Coronavirus Business Interruption Loan Scheme. The CBILS aims to ensure that SME’s can access the finance they need to keep going, through various forms of loans. The scheme is meant to enable access to loans, overdrafts, invoice finance and asset finance. The loan is repayable over up to 6 years.

For sole trader businesses, the government has established the self-employment income support scheme. This is the self-employed equivalent to the Job Retention Scheme.

These interventions, with a myriad of others, are being put in place to avoid the probable economic impact of COVID-19. They have, however, been beset with problems, and there are questions around their execution, sufficiency and effectiveness.

Dominique Ingram is a highly regarded and experienced commercial lawyer. She has owned her own limited company for over a decade, operating out of Central London. She shared her views with me on the support for owners of limited companies in particular.

ICAEW Chief Executive Michael Izza says that while government measures to aid the UK economy show promise, more needs to be done to get cash out to small businesses. In the ICAEW publication ”Insights”, he notes three areas that require further government action.This, in order to ensure viable business don’t fail due to lack of liquidity.

The Shadow Minister for Business Ed Milliband echoes these principles. He recently stated to the press: “The fate of many businesses lie in the decisions the chancellor makes over the coming days. He needs to act now, or businesses will begin to go to the wall in increasing numbers.” 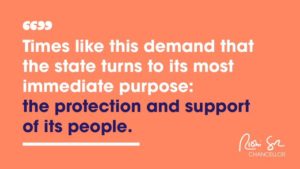 The Chancellor understands what is at stake. He also understands the stark choices before him. “Despite the significant economic interventions we have put in place, we will not be able to protect every single job or save every single business…that’s just simply not possible,” Mr Sunak said at a Corona virus press briefing at No.10 recently.