From forbidden fruit to popped cherries to oysters boasting aphrodisiac properties, the link between food and sex is age-old. The digital era has provided a fresh list of sexual food metaphors. The popularity of the aubergine emoji, for instance, is down to more than just the growth of veganism.

But now we have an especially novel addition to the food-sex connection: the arrival of food-based online dating.

Food-based dating apps share a goal: to use food as a vehicle to land you a date. Are they a gimmick with a sell-by date? Or could one of them be the missing ingredient on your quest for love?

Refridgerdating: finding love through your fridge 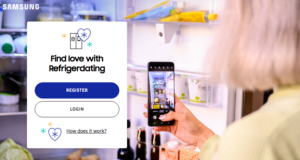 Refridgerdating is blind dating with a culinary twist. Launched by Samsung in Sweden last year -but available in the UK too- it does what the name suggests. This app finds you a date based on the contents of your fridge.

A user’s fridge is the only information to base your matches on- personal photos are strictly prohibited. Samsung have spun this as a less shallow approach to dating – it’s ‘dating where the inside is all that counts’.

The electronics giants do have an agenda for playing cupid. The app serves as a product promotion for the new Samsung fridge, equipped with a camera inside.

But they’ve been kind enough to suggest some chat-up lines for refridgerdator newbies. A recommended icebreaker: “Hey! love that spicy taco sauce, reminds me of my exchange semester in Mexico”.

What do people make of refridgerdating? Let’s hear some opinions: 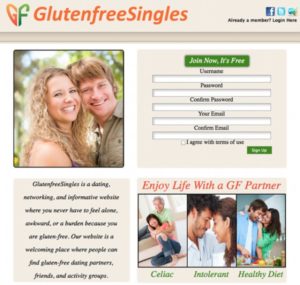 Gluten-Free singles is less about bringing people together through shared favourite foods but, rather, through what their diets mutually lack.

To create an account, you must disclose whether you’re coeliac, gf-intolerant or gluten-free by choice. But rest assured, it’s a welcoming space for all.

The site’s Californian founders empathise with the struggles of gf folk, navigating, “a world where gluten-soaked foods are just about everywhere”. It reassures them, this is a space where “you never have to feel alone, awkward, or a burden because you are gluten-free”.

This intense emotional appeal may seem comical. But maybe that’s tied up with the lo-key stigma around being gluten-free: a diet that’s so often dismissed, associated with preciousness. All the more reason why some might be tempted to give this app a go and spare themselves disparaging comments by actively seeking out a gf partner.

The site offers a strong sense of community. There’s a space for recipe exchanges and you can even attend a gluten-free evening social.

Seems pretty wholesome. Though it may evoke fears in a geneticist about an abundance of coelaic offspring. 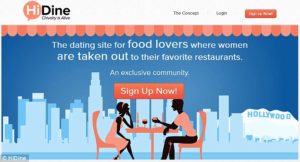 Hi-Dine was a dating app created in the US several years ago. It planned to launch in the UK but collapsed before it made it over here. What went wrong? And what’s the lesson for newer food dating ventures?

“Similar taste buds are the cornerstone of a good relationship”, claimed its creators. Hi-Dine matched you with others based on similar food preferences then sorted out a restaurant spot for your first date. But the logistics were less-than-progressive.

After listing the restaurants they wanted to visit, female users had to “sit and wait” to be flooded by dining invitations from men on the site. Male users would then have to foot the restaurant bill in advance.

“Chivalry is Alive”, was its tagline- but the reception from American daters suggestion otherwise. The app collapsed. A take-away message: food dating that relies on traditional gender roles, and caters exclusively to hetero daters, is limited in scope.

A word of caution: food dating sites are breeding grounds for ‘sneaters’.

“Sneating” (sneaky eating) describes the act of going on a date, with no romantic intent, purely for the purpose of getting a free meal. Otherwise known as a “foodie call”. A culinary variation on the booty call, where a gourmet restaurant order, not sex, is the object of ones desire. 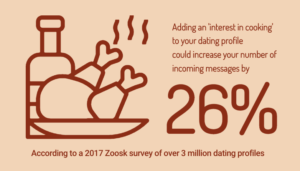 Overall verdict: Is there really an appetite for food-based dating?

Hi-Dine may have already flopped. But is there a bright future for other food dating ventures?

Forming connections over food is nothing new. And research shows that just writing ‘foodie’ on your dating profile can automatically get you more hits. There’s clearly a logic to food-based dating.

As for GF-singles, don’t underestimate the strength of bonds formed through a buckwheat recipe exchange.

Allergy spreading and sneating aside, on the whole, food-based dating seems like a fun and fairly harmless concept.

But I fear the real challenge for these apps: food conversations have already infiltrated every mainstream dating app.

Spend five minutes flicking through Hinge and you’ll notice the abundance of food-related content on people’s profiles. Highlights from today’s scroll: one profile with the “full disclosure: highly enjoys pulp in my orange juice”. And a dedicated gym bro listing “a protein shake” as his “death-row meal”.

Online daters seem keen to factor food into the equation. But the real challenge for food dating creators: when the theme so readily crops up in regular apps, how do you create a large enough appetite for dating apps premised solely on eating?