Eight in ten say they have no confidence in the UK Government’s handling of the coronavirus crisis. A small sample size of 24 UK university students, aged 18 to 24, were almost unanimous in their review of the government’s COVID-19 management strategy. 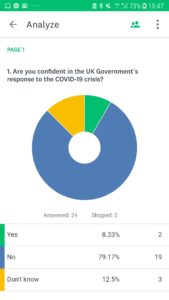 Public opinion over the UK Government’s role in combating the virus has contradicted this poll. Even 18 to 24-year olds, who overwhelmingly voted for opposition parties at the last election in December, have been presented in polling as holding a positive view on the government’s oversight of the crisis. 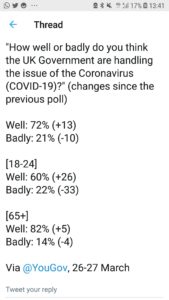 Out of the 22 students, many were international undergraduates and post-graduates from universities around the UK. At various points during the global spread of the pandemic, some were asked to evacuate the UK and return home for a period of self-isolation or quarantine, as their home nation prepared to move to a total lockdown. Others voluntarily returned home for the precise reason that they saw the UK has been several days or weeks behind other nations in their reaction to the pandemic.

Sonali Deshpande is an undergraduate student at the London School of Economics, originally from the state of Massachusetts, USA. Her indictment of the authorities on this side of the Atlantic speaks to the strength of criticism from the poll: “The UK government was urging universities to stay open when the coronavirus cases were rising by the hundreds in the UK”.  Sonali related the crisis to the UK class structure and wider political system, adding that “their refusal to acknowledge the direness of the outbreak even after the WHO deemed it as a ‘pandemic’ was an attempt by the ruling class who runs the government to keep the economy running for the sake of their personal incomes”.

“While LSE remained open and classes running as per government recommendations, I was reckoning with the possibility of not being able to return to my home country if the disease were to escalate further”, she explained. Sonali is one of the many students caught between a rock and a hard place insofar as her life in London and keeping within guidelines: “ultimately, when the US placed a travel ban on Europe in March, I was forced to make a split second decision to book a plane ticket home before LSE had announced anything about remote learning”.

“Luckily, I made it home safely and am able to [sic] continue my learning as well any LSE student, but unexpectedly spending 700 pounds on a plane ticket as an undergraduate student was not ideal”. Sonali makes a crucial point about mental health, which is a specific issue that may not necessarily be reflected in the polling: “If the UK government had listened to the experts rather than the stock market, and encouraged schools to close when it was safe, many students like me would have been able to coordinate returning home and self-isolating without experiencing the mental and financial stress that came from waiting until we were forced to make a decision on our own”.

Julia Balm, another London-based student originally from the USA, is in the process of completing her post-graduate degree in Nuclear Science. Her comments are another example of the specific concerns that a student might have that would dictate their decision on a more general and standard style of polling: “COVID-19’s lockdown has removed the ability to both network within my program and to take advantage of conferences or other vital academic resources”. Adding that, “this has therefore removed an important reason as to why I was motivated to move internationally for my MA: to join London’s enthusiastic and vigorous academic community which constantly seeks to bring research to life”.

Polls can show starkly contrasting results when focusing specifically on the voices that are in the minority or are given less coverage, as compared to general national ‘temperature-check’ polling. Whatever the impact on groups of individuals in the crosstabs of the polls, public opinion research has suggested an overwhelming majority are in favour of an extension of lockdown measures. What those polls will not show, unfortunately, are the lives that have been turned upside down in the space of days, from apartment to apartment, continent to continent, and employment to unemployment. The frustrations of the Sonali’s and Julia’s who have had to rethink a significant part of their lives virtually overnight are stories that will be lost in the noise of public opinion.