Senator Bernie Sanders’ suspension of his campaign on April 8th for the Democratic Party’s nomination for President has cleared the way for former Vice President Joe Biden to become the presumptive nominee.

After winning the first four primaries, the self-described ‘democratic socialist’ from Vermont faced a sudden uphill battle. Almost every candidate fell in line behind Biden to resurrect his campaign overnight. After these endorsements, he shot up from positions like third and fourth to winning the state of South Carolina and a majority of the crucial Super Tuesday races.

The Sanders/Biden dichotomy, much like four years prior with Sanders/Clinton, saw an ideological and demographic split between young voters demanding policies like universal healthcare, and older voters wanting a return to the status quo amid the widely perceived chaos of the Trump era among the Party’s base.

The stark divide between generations and class are further exemplified by the registered occupations of campaign contributors, those who keep the campaigns running and mobilised with their financial aid and activism.

According to the Federal Election Commission (FEC), ‘lawyers/law firms’ are significantly in the lead for the Biden campaign in terms of contributions, collectively raising over double than the second placed occupation registered as ‘retired’. The real estate industry has also contributed some three million dollars (US) to the Party’s establishment choice and now presumptive nominee. 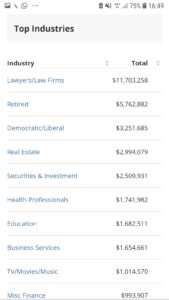 Interestingly, people registered as ‘retired’ have also collectively raised a significant sum for the Sanders campaign, topping his list of contributions. A close second is workers registered under ‘education‘, with ‘health professionals’ also being significant contributors. 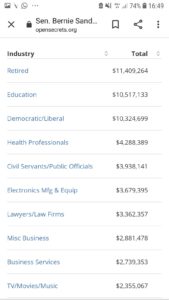 As the curtain is drawn on the Sanders campaign, the Democratic Party appears to have decided that it is, not just the party that puts the +50 vote above the preferences of younger Democrats, but that it is also more the party of lawyers, law firms, and the real estate industry than it is the party of teachers and health workers.

In the ongoing spectre of COVID-19 and its impact on public health and the economy, it will be a challenge for the candidate of the law firms to court the teachers and nurses of America, despite being in opposition to the candidate and policies they supported and contributed to.