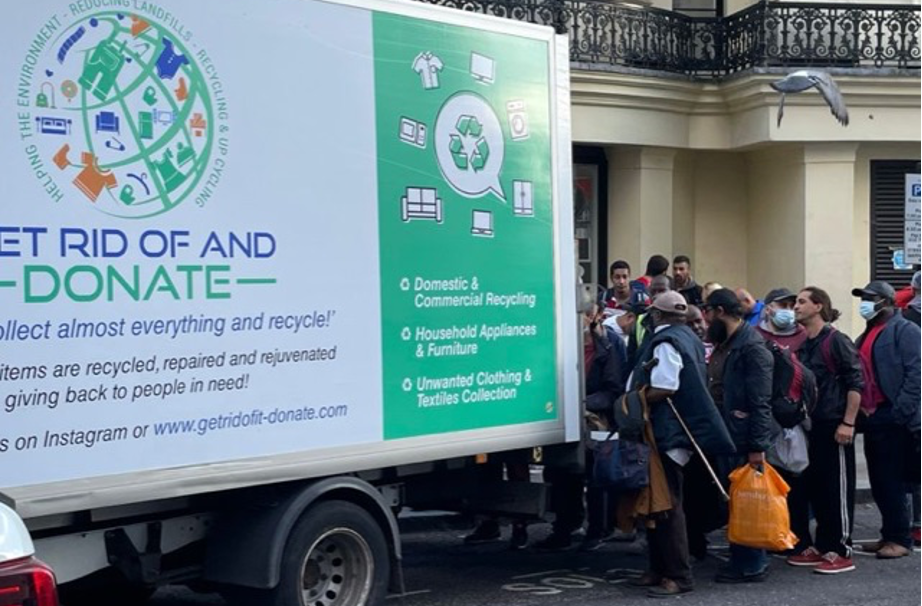 Lambeth, London – For the last two months, news coverage of the war in Ukraine has been ever-present.  Russian acts of aggression, refugees fleeing their country and politicians reciting myriad planned countermeasures have flooded the daily news cycle.

What is conspicuously absent, however, is the voice of local volunteers – volunteers that feel dutybound to act on behalf of a government that they feel is not doing enough.

“In a crisis like this”, says Andrea Brown, whilst loading up her Luton van with coats, blankets, and medical supplies. “We all feel and suffer the same pain people are going through – because we’re all humans, so it is obvious that we have to act”.

Ms Brown runs the local charity, Get Rid of and Donate, and has worked throughout the crisis in Ukraine to connect donations from people in Lambeth to the refugees that need them. She is a mother of eight, but shrugs off any suggestion that finding the time is too difficult a challenge:

“We have to help because it’s not going away, it’s going to be with us for a very long time”.

Remarkably, Ms Brown’s sense of social responsibility runs deep across the district. Eve Lewis, the soon to be host of a Ukrainian woman and her 18-month-old daughter said, “I think you’re burying your head in the sand if you don’t do anything, because it’s going to get so much worse”.

Ms Lewis is due to have a hip replacement next week – her new housemates are set to arrive soon after. She says the community rushed to her aid to provide her with all she could need for her guests: a car seat? Enter her neighbour with a “very smart” one. A stairgate? Check. Clothes? A gentleman retrieved the “nicest bundle for the little girl” from his loft.

The same story echoes across the country. From van owners driving supplies to the Polish border and people offering their homes to strangers, to the volunteers in church halls hosting education sessions on Ukrainian culture, customs and how to deal with trauma.

“The community, in a sense, is doing much more than those that are in the position to”, says Ms Brown. “These volunteers are giving their time and their lives to help other people, you know?”

“That should be recognised.”

Whilst the selfless work of volunteers has been showered with praise, the government’s response to the refugee crisis has been anything but. As the EU has written off the need for visas to seek refuge there, the UK’s visa policy has been labelled “cruel”, and “shameful”, as it persists to subject Ukrainians to these checks. Additionally, issuing the visas has been anything but plain sailing.

According to the Home Office, visa approval is a 7-day process – but the reality has looked somewhat different. Disgruntled hosts have peppered social media with stories of waiting up to six weeks to welcome those they have sponsored. Would-be families earlier this week protested the delays outside parliament, and on Wednesday, Westminster acknowledged it was having bureaucratic “difficulty” processing arrivals.

The latest figures show that only a fifth of Ukrainians issued visas under the Homes for Ukraine scheme have arrived in the UK. Whilst 86,000 visas have been issued to Ukrainians overall (including the Ukraine family scheme) only 27,000 are in the country. And of more than 51,000 that have been approved under the Homes for Ukraine scheme, only 11,000 have been united with their hosts so far.

“The balance right now is so wrong”, says Ange Riabi, who runs the Ukraine Support and Community Group. “I know the community needs to help as well. But right now, it’s in vain if these people can’t get here. We rely on support, and I don’t think we’re getting enough of it.”

With local elections fast approaching there’s pressure on the government to change this status quo. As Ms Brown loads up her fourth vanload full of donations, she said:

“I’ve had councillors in droves asking for my vote and I’m thinking, ‘why? Why would I do that?’. I’ve shown them all the things I’m doing for Get Rid of and Donate and they haven’t paid me any notice until now.”

“It feels cold and calculating, when we need compassion – we don’t have the time for these delays, and these refugees definitely don’t.”

Lambeth council was approached for comment but has not yet responded.

Watch the video below to see how donations are helping people in Ukraine: