The Static Breakers – activists trying to get news into Russia

Days after the Russian invasion of Ukraine, Russia virtually closed its presence to the world. Enforcing a new law at the start of March that bans the spread of “false information” in the tightly controlled country, individuals could see themselves punished with up to 15 years prison time.

Foreign journalists were forced to leave or risk prosecution, while 144.1 million Russians are now in the dark.

Labelled to its citizens by the Kremlin as a “special military operation”, many are unaware of the reality of atrocities committed in Ukraine.

That’s where the activists come in. Some experienced hackers, some software engineers, some journalists, and some regular concerned individuals - all using technology to filter information to Russia in the hopes of getting the truth out.

These are the people behind the screens.

Part One: The texting truth-tellers

Spurring from the lack of media freedom rising in Russia, activist-hacker group Squad303 was created by a group of programmers from Poland and partnered with prominent hacktivist group Anonymous (who have also been hacking Russian printers).

Amid the invasion, Squad303 launched a digital tool that allows anyone to send messages to Russian numbers and email addresses with readily translated messages about the war ranging from the number of deaths to alleged war crimes committed.

Gathering a mass following through Twitter, Squad303 stated that as of April 16th they had sent 70 million messages to Russians as an international collective. 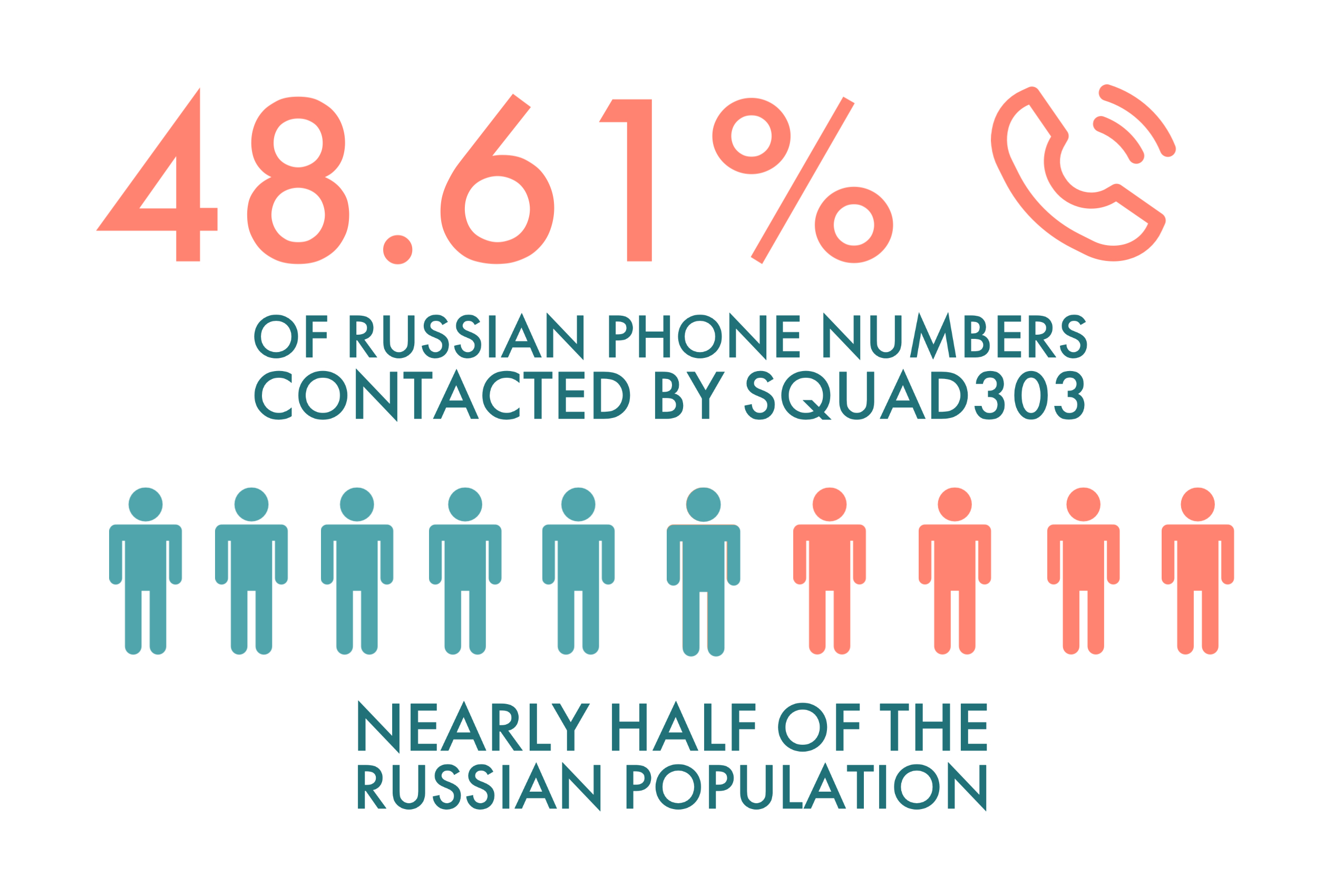 Allison from Plymouth UK (@allinewns on Twitter) had always shown interest in world news and the power of social media in hearing personal stories. But when watching the war in Ukraine unfold, she felt frustrated and helpless, despite donating to organisations on the ground.

But when she saw Anonymous hack Russian state television, she knew this would “be a war of a very different kind…[which] the internet was going to play a massive role.”

With initial apprehension and fear, she joined Squad303’s campaign and between her and her son, sent around 900-1000 messages. She says around 400 of them have started conversations with her.

“I have had some beautiful conversations with young adults who understand and do not support the war and aggression, but I have also had many replies where I have been told that Putin is their king and that their soldiers wouldn’t mock or harm civilians.”

“For every brainwashed reply I get it spurs me on further to keep sending these messages. Planting a seed of doubt and to have questions asked is all I can do.” 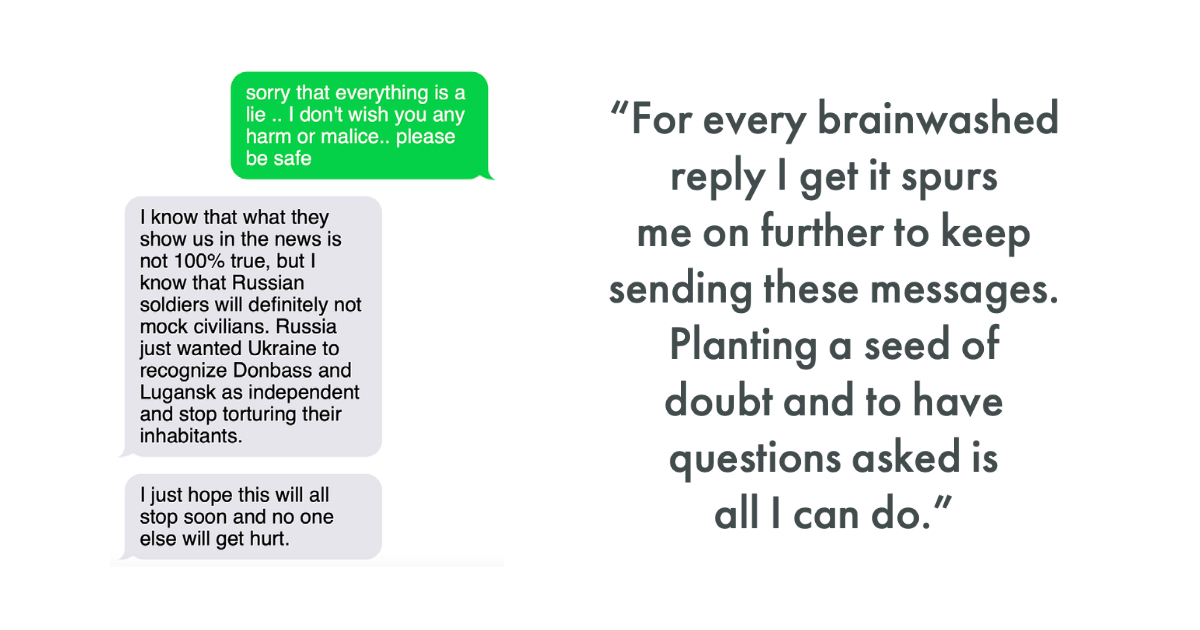 Messages through the Squad303 tool provided by @allinewns

Dey Correa (@deycorrea on Twitter) in Panama joined the movement almost from the beginning, brought on by her despair over the Ukrainians “fiercely” defending their sovereignty. Since then, she has sent more than 2000 emails and 300 WhatsApp messages.

“Most of them don’t answer or block at me, the other answers with bad words, horrible feelings – like they agree with the war, that they are going to kill me and things like that.”

“Just a small amount says thank you or I’m not part of the war,” she adds.

Part Two: Some journalists and some numbers

International non-profit Reporters Without Borders launched a campaign amid the media blackout titled ‘The Truth Wins’ in what they have labelled as “the perfect code to outsmart online censorship”.

Kristin Bässe RSF Germany’s Media and Public Relations Officer explains that to outmaneuver government censorship, the campaign takes advantage of a popular game that is in the news and is run by the very states they are targeting: national lotteries.

The current lottery numbers can be readily found in newspapers, online and on the streets – and are not censored in advance.

Russian citizens can then type in the day’s lottery numbers in the Twitter search bar and gain access to independent news and first-hand accounts of those censored by the Russian government.

“By embedding the latest lottery numbers into the campaign's Twitter accounts and content and updating them regularly, we can always be a step ahead,” Bässe says.

Through code-sharing website github.com, they provide coding instructions to include the message in websites that won’t be blocked by Russian censorship.

Part Four: Is anyone listening?

Early in March the world watched as thousands of Russian citizens took to the streets in protest of the Ukraine war.

According to human rights media project OVD-Info, more than 10,000 people had been detained for protesting. 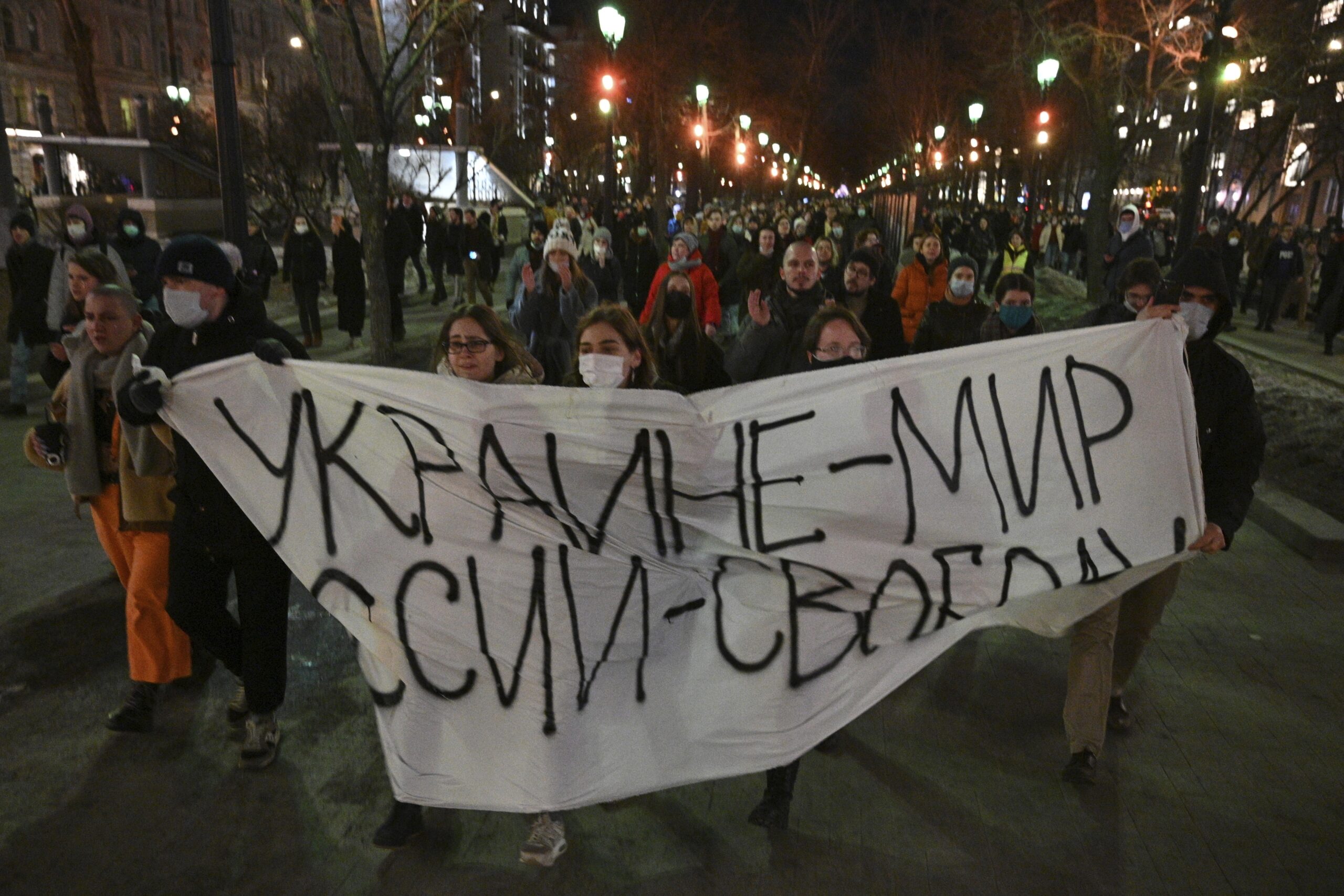 But now, it is difficult to know the attitudes of Russians given the limited insight into the news they are being told.

While the world waits for TVs to turn on again and newspapers to be read - hacking printers, overriding lottery numbers, direct messaging and website coding shines a small light.

Fax for Facts? Get more of the story on Anonymous’ printer hacking in Russia with our TikTok explainer: