Nazanin Zaghari-Ratcliffe left her home in the UK in March 2016.

The 37-year-old mother, at that time employed by the Thompson Reuters Foundation, boarded a plane to Tehran with her 22-month-old daughter, Gabriella.

She was planning to spend two weeks in Iran to celebrate Nowruz with her family and let her parents meet their granddaughter.

However, Nazanin wouldn't return to the UK until 2022. Two weeks turned into 6 years.

Nazanin was arrested at Imam Khomeini Airport on April 3 2016 while waiting with her daughter to board their flight back to the UK.

The arrest was made by Iran’s Revolutionary Guard Corps, known more commonly as the IRGC. The IRGC initially refused to public state the reason for the arrest.

Nazanin was later sentence to five years in prison on these secret charges. These were later revealed to be heading a “foreign hostile network.”

But why was Nazanin really taken prisoner by Iran? It became increasingly clear that the British-Iranian dual national was being used as a bargaining chip by Iran to gain political leverage over the British state.

The British government owed Iran a debt of £400 million for the purchase of Chieftain tanks. The Iranian Revolution in 1979 stalled the deal and the tanks never arrived.

Dr Louise Kettle, Assistant Professor of International Relations at the University of Nottingham, explains why the debt was never paid.

The seizure of foreign citizens in order to gain concessions has been a worrying policy from the Iranian State in the last two decades. The practice is often referred to as ‘hostage diplomacy.’

Iran has detained a number of dual nationals in recent years, not just from the UK but also the US, Australia and Canada. These individuals, often arrested on very dubious charges, have been, like Nazanin, used as diplomatic leverage to get something in return for their release.

There is no definitive answer for why Iran continues to pursue this policy. Some cite internal political differences within Iran. There is an impression that hardliners within the country such as members of the extremely nationalistic IRCG, want to discourage assimilation with Western states.

However, what can be said is that, for Iran, hostage diplomacy is clearly working. Iran is able to use the detention of dual nationals to settle old scores and claim a diplomatic victory. It is also a policy that Western states currently have no normalised or effective response to.

But what happened in those six years and how did Nazanin finally reach freedom?

For Nazanin, her imprisonment was a horrendous ordeal. After subject to heavy interrogation, she was held in Tehran’s Evin prison. After two years inside the prison, Nazanin was allowed to see her daughter on a temporary three-day release before being returned to her cell.

In 2019, Nazanin undertook two hunger strikes in protest of being denied specialist medical care and demanding her unconditional release, one which lasted for 15 days.

March 2020 gave Nazanin a glimmer of hope, with Covid cases running rampant through the prison, she was moved to her parent’s house to be held under house arrest. In April 2021 her prison sentence was extended by another year, accused of taking part in a protest in London 12 years previously.

During these six years, forces in the UK were fighting for her release. No more so than her husband, Richard.

While his wife remained a prisoner 5,000 km away, Richard devoted his life to securing her release. He tirelessly campaigned and sought publicity for her case despite the initial advice of the Foreign Office to remain quiet.

In October 2021, Richard began another hunger strike outside the Foreign Office demanding that the government do more to return his wife to the UK. Richard maintained his hunger strike for 21 days, sleeping in a small tent in Whitehall.

Rob Powell, journalist at Sky News who covered the Zaghari-Ratcliffe story, believes that a great reason why Nazanin was eventually released was “because of her husband.”

He just knew how to keep her in the headlines

Richard was “willing to do lots of interviews and was very level headed.” This ability to work with the media caused public pressure on the government to act. 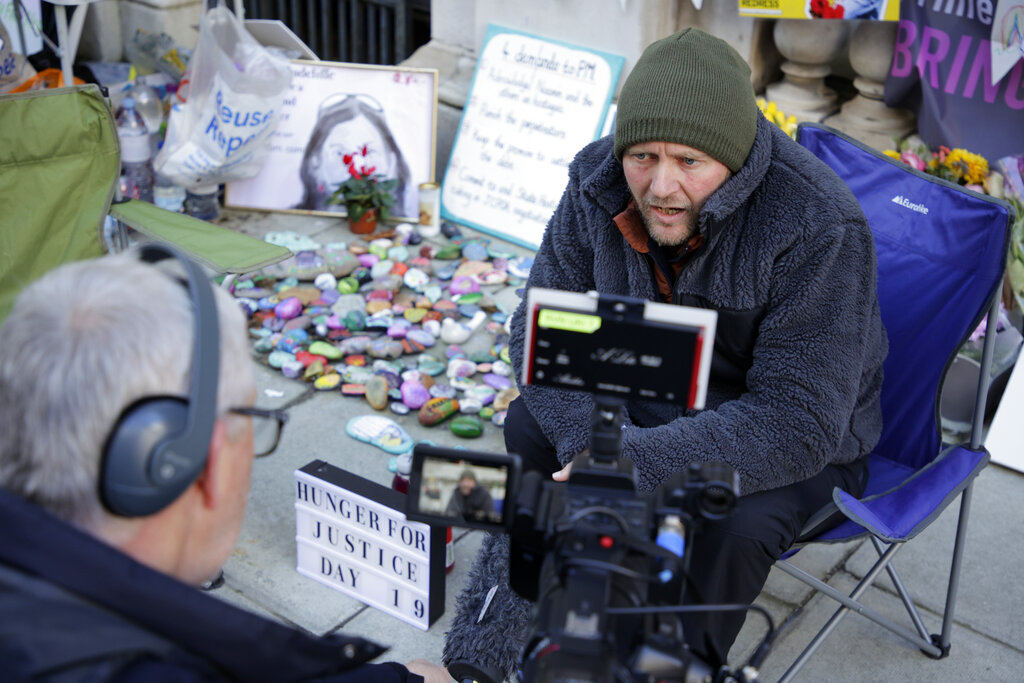 Richard speaking to the media Richard camped outside of Whitehall

The breakthrough finally came in March 2022. Working with Oman as an intermediary, the British government reached a deal with Iran to secure the return of both Nazanin and another prisoner, Anoosheh Ashoori.

Unsurprisingly for many, the deal came in tandem with the payment of the £400 million debt with the caveat that it only be used for humanitarian purposes. An argument for why the deal had taken so long to achieve is that the British government began to treat the debt, not as a ransom but an unrelated legally-owed payment.

Nazanin left Iran aboard an RAF plan on 16 March. Touching down in the UK, six years after she had left, she was finally reunited with her husband and daughter, ready to begin their next chapter of their life together.