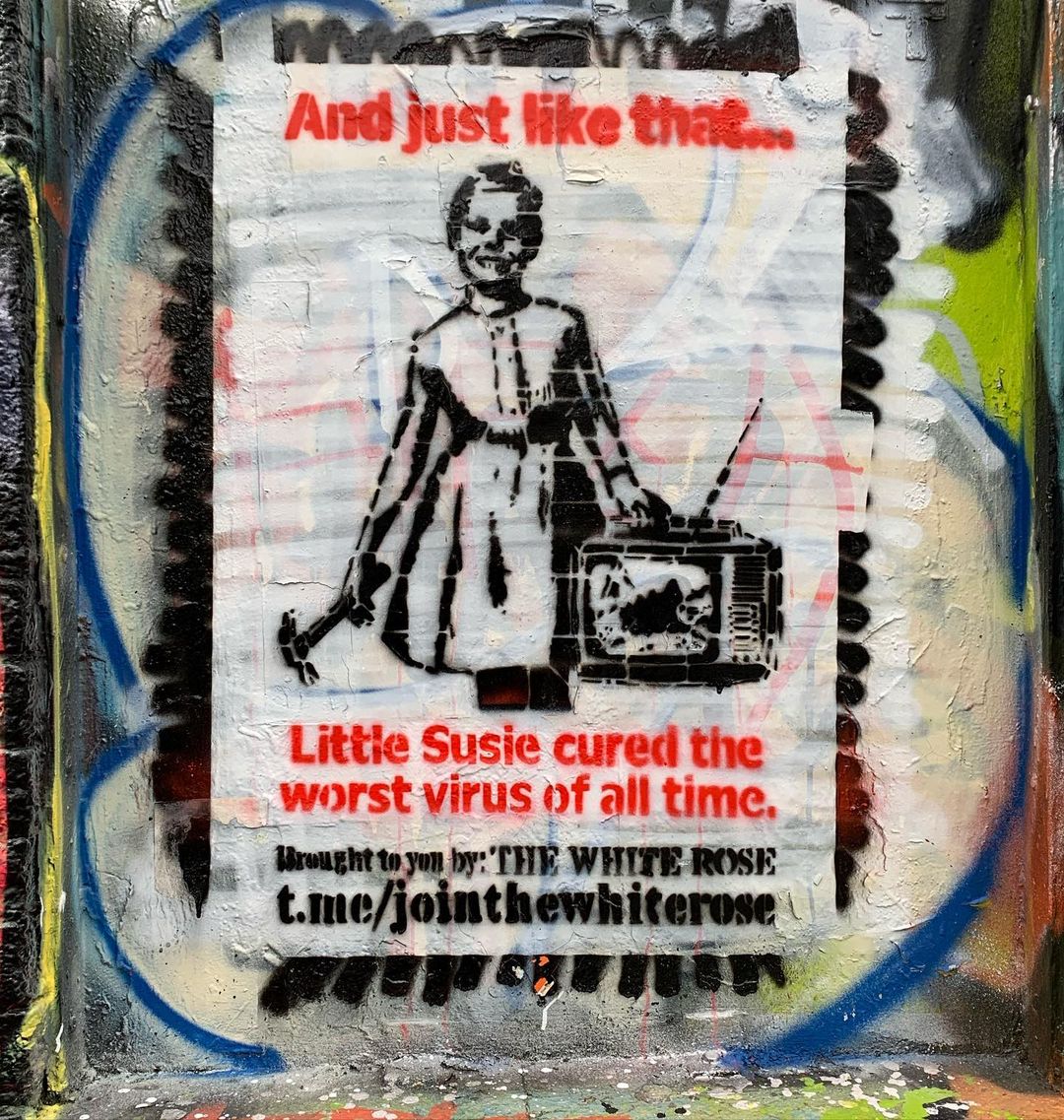 The UK is littered with strange leaflets.

They’re glued on street lamps among adverts for skate brands, looming at you as you wait for the light to go green.

Their illuminati eyes peep out invitingly from tree branches – strategically placed there for your attention.

They even pop up, in graffiti form, across the inked walls of Brick Lane in London; a moment of ominousness breaking a sea of colour.

“WE’VE BECOME A SOCIETY OF SPINELESS, MUZZLED COWARDS,” booms one.

“YOU’RE GOING TO LET OUR COUNTRY BECOME AN AUTHORITARIAN HELLHOLE,” reads another, “OVER A VIRUS WITH A 99% RECOVERY RATE?”

When the posters do make specific anti-lockdown claims, they’re usually downright false. The UK’s latest Covid-19 data, for example, shows that around 2.9% of positive cases have resulted in deaths, making the recovery rate (at most) 97.1%.

A Look at Our Numbers by S B Raddock

Most of the time, though, they just use gaudy, sanctimonious slogans that mock the public for obeying guidelines. Where online Covid-19 disinformation fails at brevity and getting beyond niche audiences, guerrilla anti-lockdown street propaganda is designed to instantly provoke everyone who sees it. And where agitators can be betrayed by their footprints online, developments offline show that they may be adapting.

“It is a mistake to think that conspiracies are purely an online problem,” says Eileen Culloty, a disinformation researcher at Dublin City University.

“One of the reasons we focus so much on digital disinformation is that it’s very visible, and you can trace content across platforms. But when you’re talking about putting up posters in the middle of the night or leafleting doorways, it’s very hard to keep track of that, to understand the scale of it, or to trace it back to a particular person.”

Reputation in the balance, Facebook has ramped up moderation, shutting 2 million accounts accused of falsehoods in 2020 alone. Even the 45th U.S. President wasn’t immune. For offline anti-lockdown propagandists, the exodus proved to be a gift.

“Truthpaper” The Light now claims a monthly UK print run of 100,000. Created just four months ago, the White Rose, an international stickering and graffiti group, now broadcasts detailed printing and design instructions to over 16,000 subscribers daily. Sucked in by a web of self-referring links and QR codes, users congregate on their encrypted Telegram and Gab netherworlds, keeping ideological discussion to a minimum and working at mobilising other foot soldiers.

Beneath the surface, there is little new in the way of ideas. Both groups rehash long-running internet ‘debates’ about new world orders, repackaging it to portray the current pandemic as a hoax. They show an absurd cognitive dissonance around the far-right: The Light, for instance, portrays the State in fascistic terms while promoting Covid-denying content from notorious Neo-Nazi Mark Collett. The White Rose, which borrows its name from the 1940s anti-Nazi student group, uses distribution tactics and stickering designs bearing a striking resemblance to those used by the Hundred Handers, a white supremacist street group.

“I find it so insulting that they were using the name of an organisation that was anti-fascist for what looks like fascist means,” says Fr. Mark Paine, a Birmingham-based priest who campaigns for his 3000 Twitter followers to remove The White Rose’s posters when they see them.

A White Rose spokesperson declined to comment for this piece, but only after sharing my initial emails with the entire group. The 371 Telegram responses included comments dismissing my approach as the “most nefarious, disingenuous and perfidious of the lizard, lamestream media.” Another asserted that I “need taking out with a vengeance.”

I find it so insulting that they were using the name of an organisation that was anti-fascist for what looks like fascist means.

According to David Lawrence of Hope Not Hate, an anti-extremist organisation, forcing such groups off mainstream social media may be worsening this kind of vehemence.

“When they end up on alternative platforms, it becomes even more of an echo chamber,” he says. “There are a lot more entrenched far-right subcultures on these platforms, and it means they can potentially make things a bit more extreme.”

Conspiracies may be getting more slippery and tech-savvy, but the anxiety behind them remains as human as ever. Lawrence points to the “ecstasy” of forming a community as a key allure, and says conspiracy theorists are attracted by the buzz of feeling they’re solving a grand plot together.

Some of the immediate solutions may be a quick fix: the stickers can be peeled off, the graffiti can be covered up. Eileen Culloty argues that toning down our “sneering and derision” towards conspiracists can equally go a long way.

If anything, though, the surge in offline tactics shows us that social networks did not create this ignorance. However the worry will be that disinformation is becoming more flexible and less easily curbed. With encryption and street vandalism in their artillery, anonymous conspiracists could potentially, and dangerously disrupt the public while remaining completely untraceable.

Of all the recent developments in online or real-world hyperreality, the emergence of faceless fake news graffiti zealots may be among the more depressing. Exempt from moderation, their propaganda could potentially either expand as a growing threat to public health, or simply die a death. That it has boomed so late into this pandemic means we may not witness the full extent of their capabilities this time around.

But next time you’re out for a walk and find yourself enticed by some cryptic street art that might seem nefarious, know that it probably is.