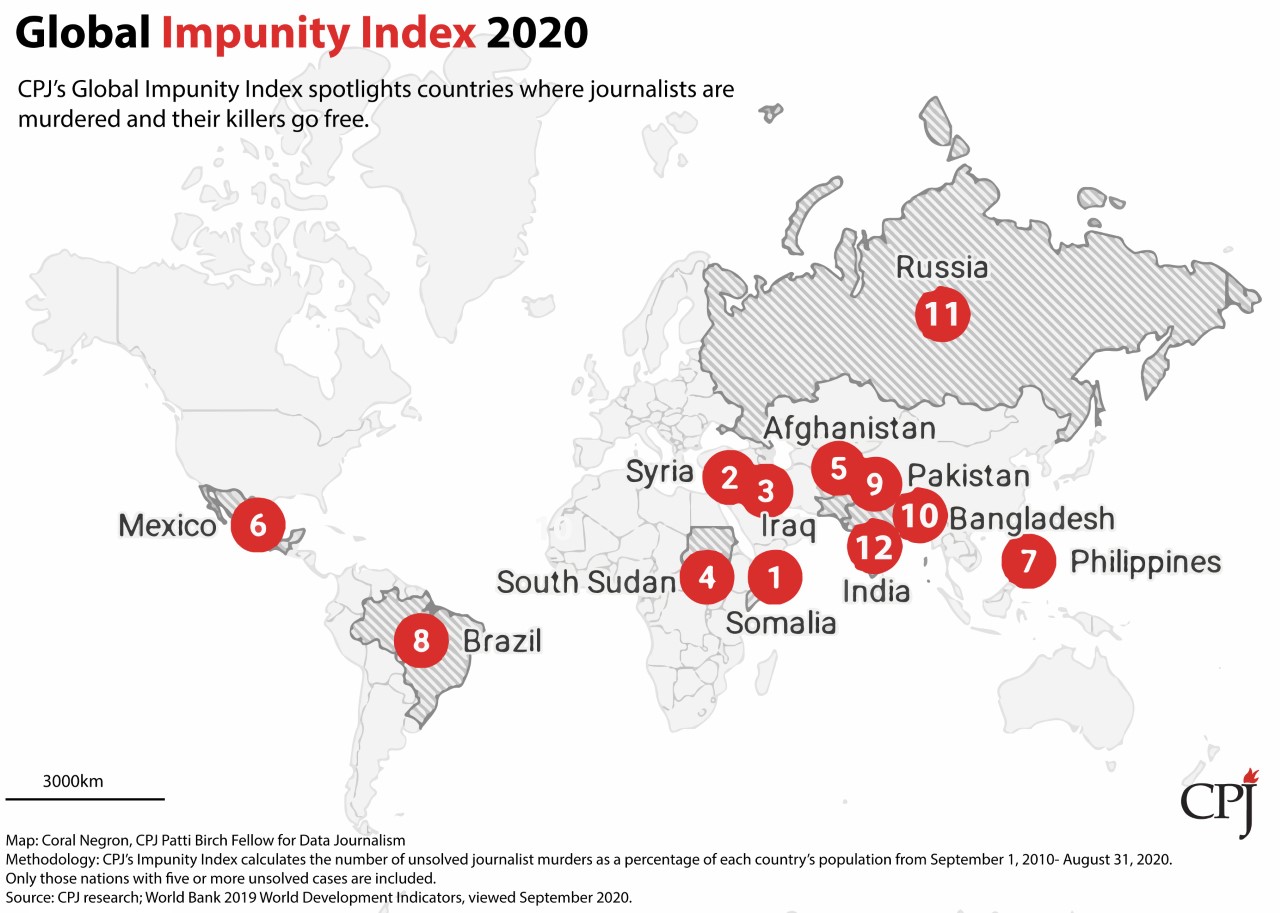 Each year, the Index highlight Countries where Criminals in collusion with Political Groups, Politicos and Business Leaders resort to violence, to silence Critical and Investigative Scribes.

The report is named as “Getting Away With Murder”

The number of murders of journalists in 2020 surged past the 2019 figures.

Somalia, Syria, Iraq and South Sudan cling to the worst four spots on the list.

The Committee to Protect Journalists inferred that corruption, fragile institutions, and lack of political will to pursue robust investigations contribute towards impunity in these countries among which Pakistan, Mexico and Philippines reign supreme.

Pakistan and the Philippines have been part of the Global Impunity Index since its inception in 2008.

The Philippines is the biggest mover in this year’s rankings, improving from the fifth worst country worldwide to the seventh worst.

Country With Most Mortalities

Mexico, the deadliest Country for journalists in the western hemisphere moved to the sixth worst impunity ranking from seventh last year. So far, in 2020, at least four journalists have been murdered in retaliation for their work.

CPJ defines murder as a deliberate killing of a specific journalist in retaliation for the victim’s work.

All 12 Countries have featured multiple times since CPJ first compiled the Index in 2008 and 7 have appeared in consecutive years.

Q. What do you have to say on non-participation of India in UNESCO Impunity Accountability Mechanism?

A. Participating in UNESCO’s Impunity Accountability Mechanism would show that India has the political will to actually combat impunity.

Q. Given the fact that India is at the 12th position of “Global Impunity Index 2020”, please share your views on journalists being targeted in India for daring to report pertinent issues of crime, corruption and collusion between politicos, criminals and police ?

Q. Where do you see the journalists’ Freedom of Speech and Expression heading towards and what are the measures that can be initiated to make it more effective in this day and age?

A. Unfortunately press freedom around the world has deteriorated in recent years as many government leaders have denounced the press. Countries can take measures to ensure safe working environments for all journalists and can work to decrease corruption, strengthen institutions, and create political will to combat impunity.

During the 10-year Index period ending August 31, 2020 , 277 journalists were murdered for their work worldwide and in 83 per cent of those instances, no perpetrators have been prosecuted.

Illustrating the entrenched nature of impunity, the 12 Countries on the Index account for 80 per cent of the global total of unsolved murders of journalists for the 10-year Index period.

On 16 October 2017, Caruana Galizia was murdered close to, attracting widespread local and international condemnation of the attack.