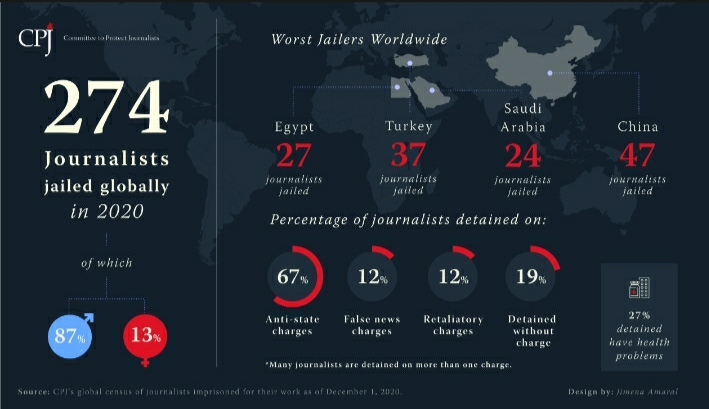 The Committee to Protect Journalists today released the 2020 Global Census of Journalists imprisoned for their work.

In contrast to the previous year’s summation, 274 journalists were sent to captivity for covering instances of the pandemic and civil unrest as of December 01, 2020.

This happens to be the highest number, ever since CPJ began collecting data in the early 1990’s.

Several journalists were arrested in China for their coverage of the pandemic. China has been the world’s worst captor for the second consecutive year.

Turkey followed China’s footsteps and Egypt crossed all the limits by keeping journalists in custody without corroborating the facts pertaining to the alleged crime committed by them.

Saudi Arabia also happens to be in the league for imprisoning journalists.

Belarus, a European Nation where journalists were imprisoned for covering dissent by people protesting in large numbers, which ensued over the disputed re-election of the long-time president Alexander Lukashenko, who claimed victory in an election widely alleged as unscrupulous.

Imprisoned Journalists in Belarus were the first listed on CPJ’s census ever since 2014.

Political unrest, in this case leading to armed conflict, also led authorities to round up journalists in Ethiopia; at least seven were jailed there, compared with one a year earlier.

Most of them are accused of anti-state crimes, yet authorities have repeatedly extended their detention in order to investigate, without bringing forth any evidence.

“It’s shocking and appalling that we are seeing a record number of journalists imprisoned in the midst of a global pandemic.”

“This wave of repression is a form of censorship that is disrupting the flow of information and fueling the infodemic. With COVID 19 raging through the world’s prison, it’s also putting the lives of journalists at risk.”

Dissent and Political disturbance were found to be predominant reasons for most of the arrests.

CPJ defines journalists as people who cover the news or comment on public affairs in any media, including print, photographs, radio, television, and online. In its annual prison census, CPJ includes only those journalists who it has confirmed have been imprisoned in relation to their work.

The detailed report can be viewed on http://cpj.org.