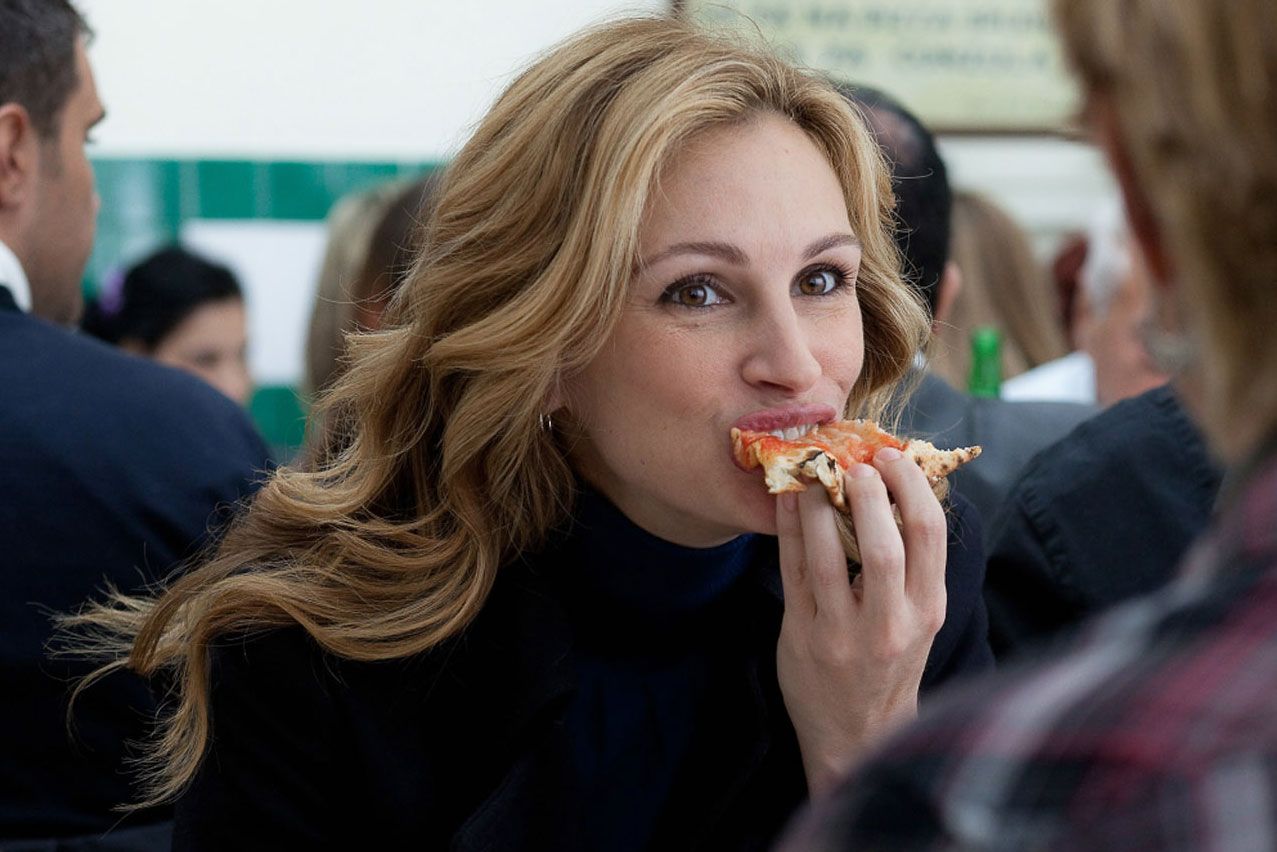 The art of eating well – lessons from Eat, Pray, Love

Re-watching Eat, Pray, Love feels like travelling through a time machine. Julia Roberts travels around the globe, including Italy and eats all the food. A lifetime ago it seems now. In Italy, there are multiple scenes of her indulging in all the no go foods: pizza, pasta, gelato. Yum.

Julia Roberts’s character, Liz, initially has a more restrictive relationship with food, avoiding carb heavy and sugary foods. But when she decides to travel the world in search of something more, her relationship with food changes. She allows pleasure into her life by letting herself to enjoy what she is eating rather than obsessing and feeling guilty about it.

“I have no interest in being obese, I’m just through with the guilt.”

She says to her Swedish friend in Italy:

“Let me ask you something, in all the years that you have…undressed in front of a gentleman has he ever asked you to leave? Has he ever walked out and left? No? It’s because he doesn’t care! He’s in a room with a naked girl, he just won the lottery. I am so tired of saying no, waking up in the morning and recalling every single thing I ate the day before, counting every calorie I consumed so I know just how much self-loathing to take into the shower. I’m going for it. I have no interest in being obese, I’m just through with the guilt. So this is what I’m going to do, I’m going to finish this pizza, and then we are going to go watch the soccer game, and tomorrow we are going to go on a little date and buy ourselves some bigger jeans.”

It feels like a welcome reminder. Thankfully body positivity has become big and so has the idea of accepting your body regardless of your size. But years of seeing skinny and flawless models and actors doesn’t go away overnight. Society still puts a lot of value on the way women look. According to a poll in the Pew Research Center, emphasis was placed on “beauty” as important for women while “provider” was mostly associated with men. So, it seems like the focus on women’s looks is coupled with the roles they have in society. Together with a beauty and advertising industry that earns billions on making women feel insecure, it’s a recipe for body image issues and eating disorders.

To then see a woman in Eat, Pray, Love eat what she wants feels liberating. She is saying yes to her own wants and needs instead of succumbing to society’s expectations of her. A restrictive diet means self-denial and hunger. By eating what she wants she is nourishing herself and letting herself feel full. She is allowing herself to be fulfilled. To eat well is to live well. Now let’s go get some pizza.

2 thoughts on “The art of eating well – lessons from re-watching Eat, Pray, Love”