Chalked across the sidewalk in Russell Square in bright rainbow colors are the words: “You’re too cute to walk alone.”

If you’re female and reading this, this is already all too familiar. Statistically speaking, it’s likely that something like this catcall has been shouted at you more than once in your life.

It’s the work of the Instagram account “Catcalls of London,” which aims to combat gender violence and catcalling by chalking Instagram submitted real life harassment in prominent places in London. It was started by Farah Benis after the original chapter in New York City became a viral Instagram sensation.

To state the obvious: catcalling and street harassment are a national problem. Sixty-four percent of British women reported that, “they had experienced unwanted sexual attention in public places,” in a survey conducted by End Violence Against Women in 2016. The figure skyrockets to 84 percent for women between the ages of 18 and 24. 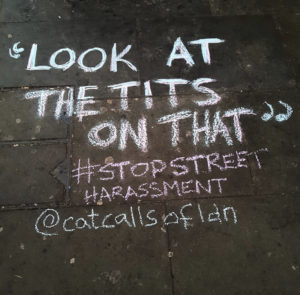 But the statistics may not reflect just how widespread the problem is. “I think the issue that we have here is that it’s highly underreported,” said Benis. “ I think that it has become so normalized here and people don’t talk about it. It is just this thing that happens and you just ‘get on with it.’  I think because of that it’s really difficult to try to look at the statistics that surround it.” 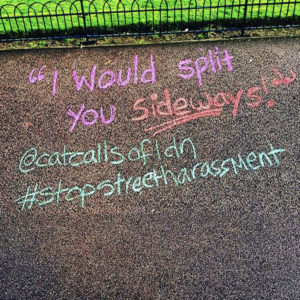 Currently, tangible legislation is not in the pipeline. It’s just one of the reasons Benis believes that the need for activism is more relevant than ever.  “I don’t think people realize how widespread it is. Everyone has a story, everyone has multiple stories. I’ve never come across a woman that hasn’t experienced it.”