Getting to know the game:

For the past 20 years, Animal Crossing has been one of the most played and loved video game franchise in the world. The saga, developed by Nintendo, has seen the release of 5 different chapters since it was created back in 2001.

This year the latest entry, Animal Crossing: New Horizons, became one of the highest-grossing games in Japan. However, with one-third of the world currently in lockdown, some players have found other ways to utilise the platform.

Nowadays, many people find themselves staying indoor way more often than what they used to. For this reason, videogames have become an excellent way to keep in touch with friends and family while also having fun.

The new chapter is compatible with the Nintendo Switch. It allows people to have virtual conversations and even ‘hang out’ in real-time with other players through their avatar.

Animal Crossing: New Horizons takes place on a fictional island where players can build their dream home. Moreover, they can collect resources, complete missions and create a whole community over time.

Players can invite other peers into their island and recreate social gatherings. Now, people are using the game to recreate important life events that could not take place due to coronavirus.

Upgrade your lifestyle, building a community!

As reported by Eurogame, many players celebrated their birthday parties and even their weddings on Animal Crossing: 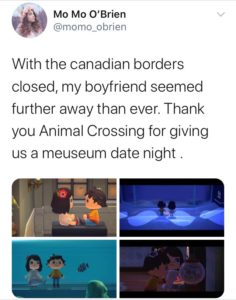 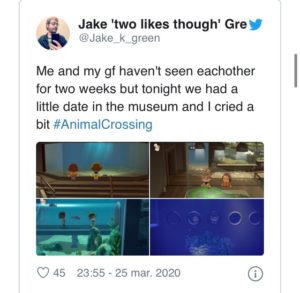 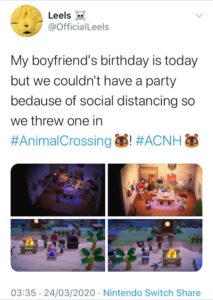 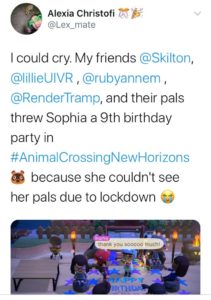 Using the game for work, is it a trend?

But that’s not all! Back in the game’s birthland, Japan, people are using it work from home. It was reported that a small Japanese company used the game as a meeting platform.

However, Animal Crossing is not able to fully replicate a person’s working life. Unfortunately, it is still impossible to complete any office task through the console.

Nevertheless, this is a clear example of how technology and gaming are becoming a huge part of our daily lives, especially now!

With traditional ways of socialising becoming increasingly threatened by the current events, the solution may be just one click away.