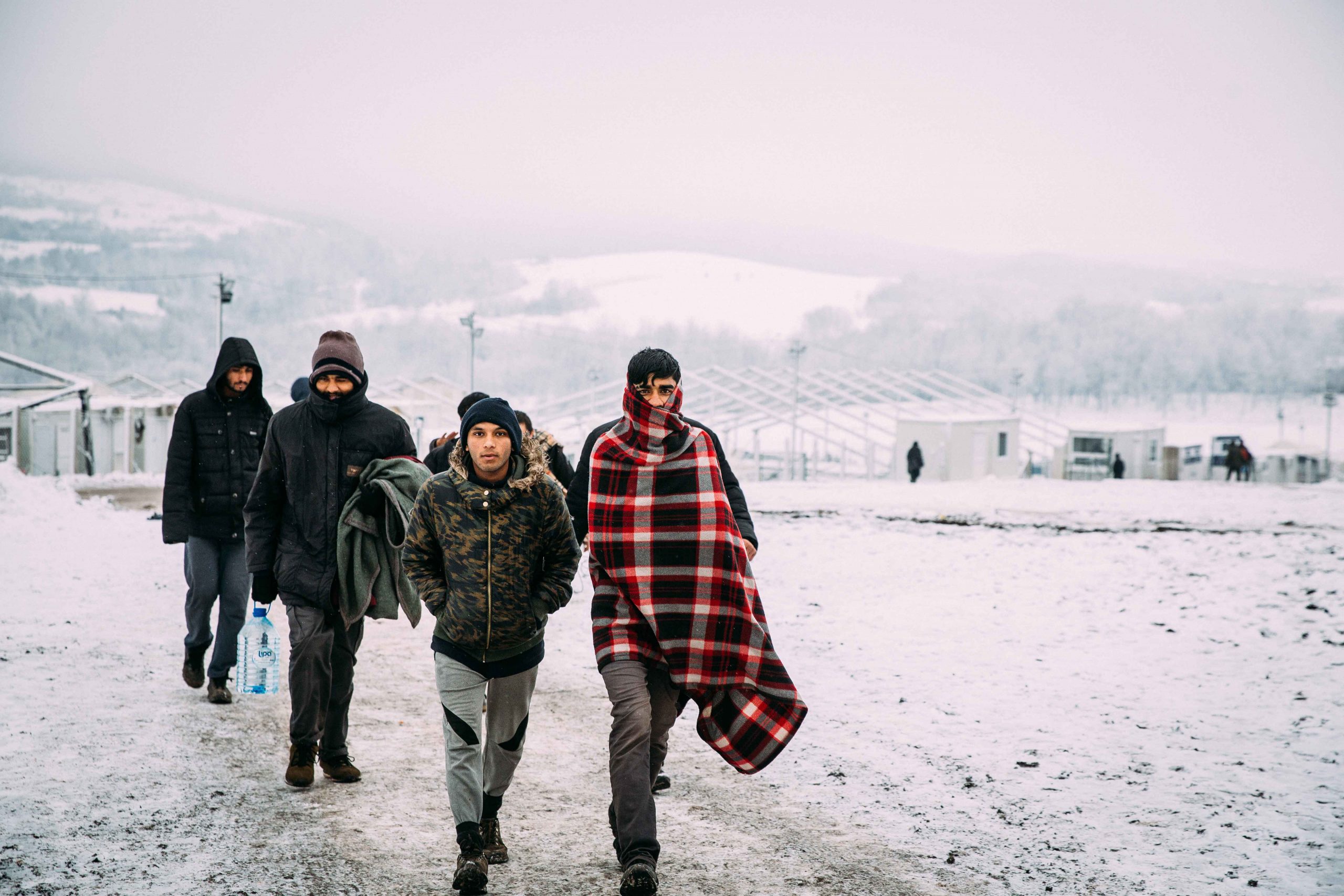 In north-western Bosnia-Herzegovina (BiH) hundreds of migrants and refugees are facing up to freezing temperatures without access to adequate shelter, medical assistance or running water. Many sleep in makeshift camps in the forest or abandoned buildings – including families with small children.

According to Amnesty International and the IOM approximately 8,500 refugees and migrants are currently stranded in Bosnia-Herzegovina. Many seek to cross the border into neighbouring European Union member Croatia and from there into Western Europe. Earlier this month the EU said 2000 people remain without basic shelter in perilously cold conditions.

The harsh winter is ramping up a crisis that had been brewing in Bosnia for years. The situation escalated in December of last year after the dismantling of the Lipa camp which was deemed unsafe by the UN’s International Organization for Migration (IOM). As a result, the pressure is mounting for the Balkan country to find long-term solutions instead of short-lived relief.

Gerhard Trabert, a German doctor and chair of the aid organization “Armut und Gesundheit in Deutschland” (“Poverty and Health in Germany”), travelled to Bosnia with two transport vans equipped as mobile medical offices. His team visited different hotspots and treated migrants living outside of the official camps.

At an abandoned retirement home in Bihac over a hundred people from Pakistan and Afghanistan are taking shelter. No windows or doors remain in the hulk of the four-story building.

“It is bitterly cold and people have put down mattresses and sleeping bags in corners, near open fires to keep warm. The floor is covered in mud and dirt. It’s truly upsetting,” Trabert said.

At several abandoned buildings and deserted factories Trabert, accompanied by two nurses and two social workers, was able to supply migrants with winter clothes and much needed medical assistance. The team treated open wounds, scabies and other skin infections. The doctor says many people suffer from respiratory issues due to exposure to smoke, others he diagnosed with pneumonia.  They also visited the so-called “Bangladeshi jungle” near Velika Kladusa. “Between 70 and 80 people still live there out in the open, in plastic tents. And it had snowed, everything was covered and it was freezing cold.”

Lipa camp continues to be “utterly unfit as a living environment”.

After pressure from Brussels, Bosnian military and local authorities moved around 850 migrants into heated tents installed near the remnants of the Lipa camp. The camp, located 30 kilometres from Bihac in the mountains of Bosnia, burned down in late December after the IOM began to shut down its operation having deemed the site unsafe and left 1400 people stranded.

Trabert and his team were able to take a look at the new Lipa camp alongside the German Ambassador and EU delegates. “We saw the burned down tents and the new tents put up by the military. On-site we received information that the new tents are not sealed. Wind blows through and rain and snow get in. […] There is also no sufficient supply of sanitary facilities. Many clean themselves outside, in the snow and the freezing cold.”

The German doctor describes the surrounding area as “hostile-to-life” and questions why the camp was set up there in the first place. “You have to remind yourself. This camp is utterly unfit as living environment, at 750m altitudes where the snow piles 20-30 centimetres high. It’s isolated in a forested area. It signals to me ‘You are not welcome. We will put you somewhere far off. Somewhere far from civilization,’. You really have the impression that these are scare tactics.”

Bosnia has been widely criticised by the European Union and humanitarian organisation for mishandling the migration crisis for which they receive millions in assistance funding from the EU.

After a great migration of refugees in 2015 through the Balkan route, EU countries like Hungary effectively closed their borders. Refugees and migrants diverted to Bosnia to play “the game”, a term amongst migrants for attempting to illegally cross the border, being pushed back and trying again.

Since Bosnia became the predominant Balkan route in 2017, the European Commission has allocated more than 88 million euros either directly to Bosnia-Herzegovina or partner organisations on the ground. 28,5 million euros of the assistance fund to help the country “manage migration” was added since December when the countries refugee crisis began to escalate.

To Trabert, the cooperation on the ground seems flawed at best. “I didn’t get the feeling that there existed any sort of concept for human-rights compliant care. It’s all very sporadic and haphazard. But I worry and sadly believe that this is intentional. They don’t want to install anything permanent.”

Despite the continued allocation of millions of euros in aid money, humanitarian organisations on the ground say very little is being done to find a long-lasting solution. Instead, politicians on a European, national and local level are in disarray over who should take responsibility for the refugees and migrants stuck in a country that seemingly refuses to care for them.

One thought on “Refugee crisis in Bosnia leaves hundreds of migrants homeless in sub-zero temperatures.”