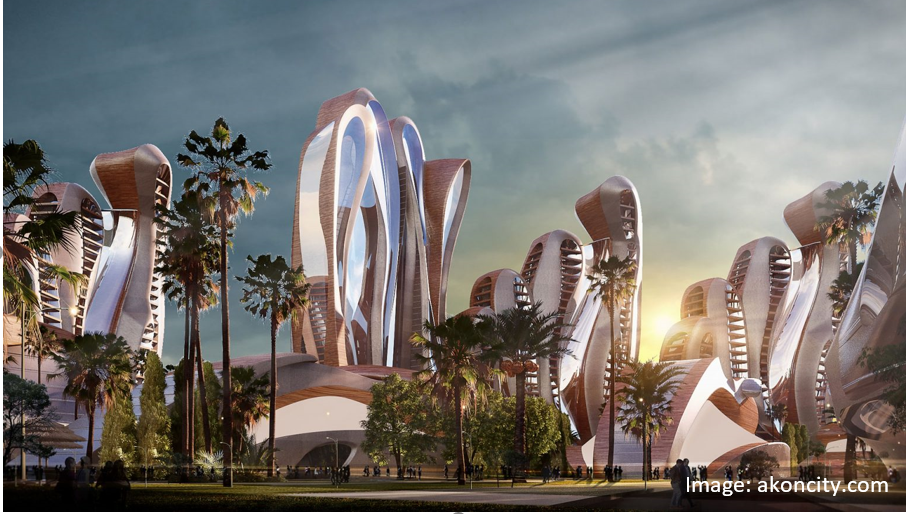 Akon – the American born Senegalese singer who became a household name in the early 2000s with tracks like ‘smack that’ and ‘lonely’ topping charts across the world.

Despite his surging popularity the R&B artist has taken a backseat when it comes to music and has now turned his focus to investing in African countries.

His first investment was Sol-Up where he aimed to provide solar-powered electricity for many living in rural parts of African countries. This investment was followed by his controversial funding of a diamond mine in South Africa.

He then established Akoin, a Cryptocurrency which he believes “offers a more secure currency that enables people in Africa to advance themselves independent of the government”.

In 2018 he shared his plans to set up a futuristic green ‘crypto city’ in Senegal. He also revealed trade within this region would be done using his Cryptocurrency.

This week the singer announced that the first stone for Akon city had been laid in Senegal. The project aims to “set the standard for all future real estate development in Senegal as a country and region as a whole”. The ‘black panther Wakanda style city’ is an investment that is worth a whopping $6 billion. The project has attracted international attention as this is the first time that something of this scale has been set up in the Northwest African region. This contributes towards its vision of “Making its mark internationally and positioning itself as one of the leading countries for creating a full circle of life from one project will create the cell to follow elsewhere”.

News of the foundation being laid was accompanied by further development plans which included how it would be financed. Many were already sceptical on whether the project plans are feasible, but the release of this new information has caused further concern.

Akon’s involvement in Africa has previously raised eyebrows. This was the case when he invested in a South African diamond mine and when questioned about conflict diamonds, proceeded to say, “I don’t even believe in conflict diamonds”. Although this incident occurred in 2007 a statement he later retracted after becoming aware of issues surrounding the trade, it still provided a ground for criticism for his future projects since, the main one being Akon city.

Earlier in September, he shared the name of the engineering firm behind the project, a US-based firm called KE international. However, he failed to disclose the name of the investors who contributed towards the $6 billion and in doing so cited none disclosure agreements. This comes after in 2015 he stated: “In Africa, you’ve gotta manipulate them.”

However, he has revealed the architecture and firm he is working with. The singer told Abu Dhabi based architect, Hussein Bakr that he wants his buildings to look like sculptors. However, the practicality of these ‘sculptors’ has been brought into question as it seems as though they will predominantly be made with glass, concrete and other metals which may not be suitable for the Senegalese heat.

Another issue, is the use of his cryptocurrency. Akon hopes that utilising Akoin may provide a stable currency throughout Africa. However, the currency heavily relies on the use of smartphones which can prove to be an issue in countries where data is expensive. This may prove to be an issue for his expansion plans as he aims to make the currency available throughout Africa. According to the Pew Research Centre, only a third of people in Senegal have smartphones with the capability of operating cryptocurrency.

Many people within the vicinity of the city are from Senegalese working class backgrounds and Akon hopes that the city will provide tourism, education and leisure facilities for all. However, there are concerns that these will not benefit those from the surrounding area but only cater for tourists and those hailing from privileged backgrounds. This argument arose due to the lack of Senegalese and West African names involved in the project. However, he hopes to train those from around the area to work in the city and provide jobs and economic stability to the region.

According to released plans, phase 1 of Akon city is supposed to open in 2023 but many are waiting in anticipation to see whether this big, one of a kind project will become a reality and live up to the promises that have been made thus far.