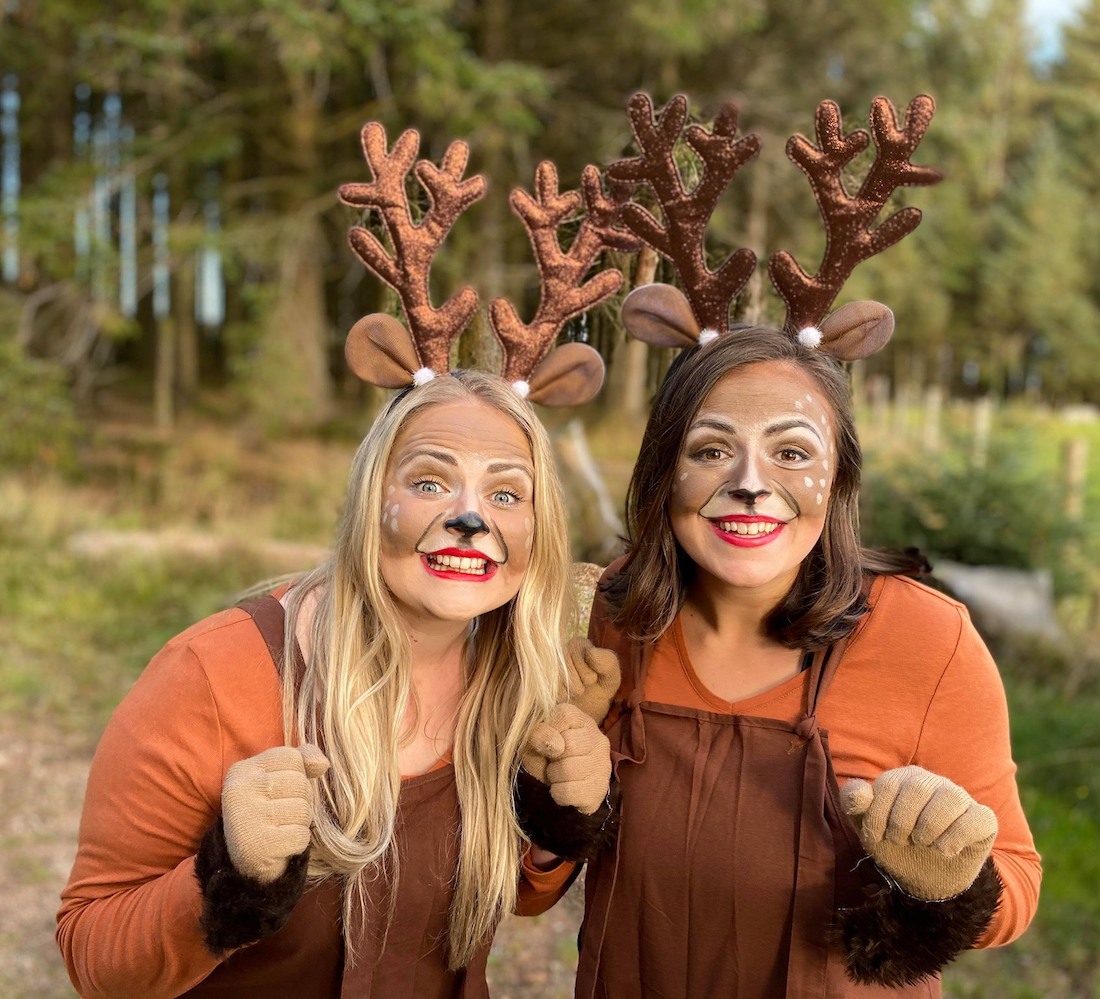 With Christmas around the corner, two Devon actresses have been successfully putting on ‘doorstep Christmas shows’ since the beginning of December to support themselves during the coronavirus pandemic and spread some festive cheer.

The show is designed for children and to be socially distanced in accordance with government guidelines.

Laura Whittet and Ashleigh Edwards went to drama school and performed regularly before gaining work in the same entertainment company where they were casting performers.

Both were made redundant back in March; Whittet says her team went from 80 members to just 8. She remained positive throughout and used the time to refocus her energy, beginning to write and sing again.

It was Edwards that had the initial idea of wanting to perform somehow during lockdown and had always wanted to perform as reindeer. They had broached the idea of performing for care homes but overall decided it was a riskier choice with coronavirus and budgeting issues.

The pair both hold a sad thought that pantomime season is not happening this year. This is often the first theatrical experience for children across the country, and so the duo decided to do “something special” for these children, as well as giving themselves a chance to perform again.

We spoke to Whittet, who says it is nice to be working on a project again, as the coronavirus has had a damaging impact on the arts. She continues to be positive: “The effect on the arts has been horrendous, but I do also think you create your own opportunities, so no matter what, there is always something artistic you can be doing.”

Whittet explains the concept of the doorstep show, where herself and Edwards, aka Merry and Berry, arrive at the homes of the children from the North Pole, where Santa is keeping himself safe until Christmas Eve: “So, Santa has sent us down, we’re trying to find the spirit of Christmas, and we’ve brought presents from Santa, but they go missing and we need the children’s help to find them.”

The children are sent on a scavenger hunt around their home,  with the parents being be pre-warned. Whittet goes on: “We have a sing and a dance, teach them a bit of movement, and they have an opportunity then to give us their letters for Santa […] we give them their presents and then we can “cheat” photos so it looks like we’re with them even though we’re stood behind.”

The doorstep show has been a huge hit in the towns where they’ve performed: “We were so surprised, it fully booked out within about 3 weeks. We did it because we wanted and hoped to perform, and then our video has had over 10 thousand views, people were asking for more and more things, like if we could do birthday parties and stuff.”

Because of this popularity, the women have had to come up with alternative experiences, including a virtual performance. This includes a pre-recorded section of Merry and Berry as well as a segment that is personalised toward the children, using a questionnaire the parents fill out beforehand.

“We’re now thinking ahead toward the future, because obviously covid is still very much going to be around, so we’re thinking toward Easter and dressing up as Easter bunnies, and trying to think of different events throughout the year we could present the doorstep show. If it can go out of the community a bit more and into towns and stuff then we will do that.”

For now though, the doorstep duo are wrapping up their shows and wishing everyone a merry Christmas, and a positive year ahead.

To book a doorstep show, you can email: merryandberryschristmasshow@gmail.com.